Forsena is the continent on which the events of Brigandine: The Legend of Forsena and Brigandine: Grand Edition take place. It is a land replete with mana, which special individuals known as Rune Knights use to summon monsters that they can control in battle.

Forsena is divided into six countries, which begin the game at war with each other (with the exception of Caerleon and New Almekia, which are allied and will not attack each other when controlled by the AI). Each country has the same goal: to unify the continent under its own banner. 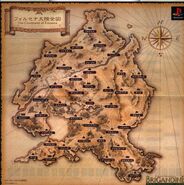 Japanese map of Forsena from Grand Edition, displaying the roads between the castles